A few years ago some friends of mine and I were location scouting for a horror film set in a cabin in the woods. The monster of the film was described in the script as a sort of nebulous shadow creature that appears on a hunter cam strapped to a tree. Initially we were considering using my friend Andrew as the Creature, so we went out to the site and did some test shots to see how they’d register, and if my costuming idea would work. We scrapped this route, but the pictures ended up being enigmatic and weird and I liked them a lot. 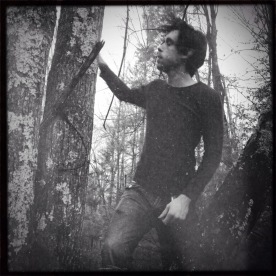